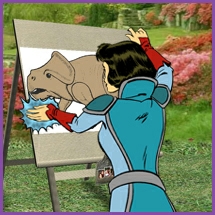 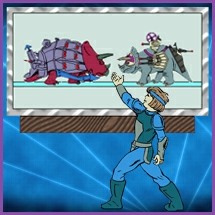 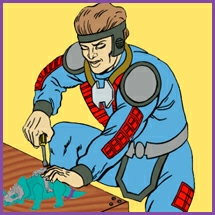 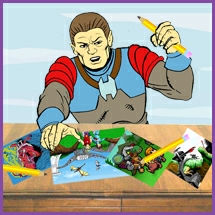 Guillermo Hernandez started an ambitious 3-D project on the SpinSquad LightWave forum.  His goal was to make a 3-D model of the entire series 2 scene. The dinosaur models are complex and have very high polygon counts. Guillermo began working on a Stegosaurus and a T. Rex and had asked other people to contribute other dinosaurs. One person started a Pteranodon and another started a Triceratops. Unfortunately, it appears that the project has died.

Here is a 3-D model of the evil Rasp. This was found on a forum called CG Talk and was created by Michael Barrington. Michael decided to update Rasp for the future with some original re-designs of the character. For example, he gave Rasp an "evolutionary" hand and decided to have him wear protective armor. He's not 100% finished and he mentioned wanting to create a dinosaur for him to ride on. Unfortunately, just like Guillermo Hernandez, he seems to have stopped the project.

Redtachi started a very ambitious project - taking the PC game “Star Wars: Empire at War” and modifying it to include Dino-Riders models.  I think they came out pretty cool - the weapons are very true to the toys.  He intends to release this mod for free whenever he completes it.  Let’s hope he does.

Here is the place where people can show off their 3-D Dino Riders models.  If you have 3-D programming skills and you want to contribute Dino-Rider concepts, feel free to send me an e-mail and I will gladly post them here.

Here is a cool picture of an armored Velociraptor that I found on a 3-D programming message board. Although it doesn't look like a traditional Dino-Rider, I couldn't help but notice the Dino-Rider style gun tips. As you can see from the picture, Juan Manuel has some serious talent.

Wiese, a.k.a. Sebastian, started an awesome Dino Riders project by creating 3-D versions of some of the Rulon figures and dinosaurs using Blender. So far, he has created Antor, Hammerhead, Rasp, Ankylosaurus and the Rulon Deinonychus.  The models are simple but are very accurate representations of the toys. So far created a few simple animations but he may ultimately create a video game with the models. I can’t wait to see more of his work and hopefully he will continue to create.